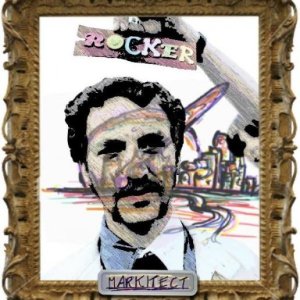 I caught the bug for the stage while performing in bands in  college, but when I moved to Baltimore in 2006 I didn’t know anyone, and didn’t know how to go about finding a new band,  so I  programmed all the parts I couldn’t play live into my computer and MARKITECT was born.

I played shows around Baltimore for the next three years until all my gear gradually blew up and I didn’t have the resources to replace it. That’s when I got into stand up comedy, cause it requires a lot less gear.

Music is a very small part of my performance content these days, compared to how I started, but I still pursue it in fits and starts, mostly through my involvement with the Baltimore Rock Opera Society. As a member of BROS I’ve been on stage, behind the scenes and been part of the band. In the spring and summer of 2015 I wrote and produced a short one act rock opera with BROS which debuted at the Creative Alliance in Baltimore, with an encore run at Artscape 2015.

Access to my full catalog has unfortunately fallen into disrepair, but Below are a few of my favorite songs I’ve done.

Here’s a Remix that I did for a friend of mine: