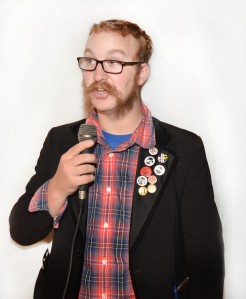 With a dry wit, a penchant for one-liners and a delivery that relishes awkward silence, Mark Miller has been described as a Mad Scientist of Comedy. Though recently transplanted to Queens, his comedy was seeded and germinated in Baltimore. His writing style is simplistically high-brow with a lean towards the absurd as obscure facts merge with kitschy knowledge. Mark has a way of relating to any crowd as he guides them through the predictably unpredictable recesses of this mind delivering unique ideas and sometimes even educating them in the process, especially when it comes to his arsenal of jokes about every former US President… as a pez dispenser.

The past year has seen Mark shoot a web pilot with Mike Rowe and expand his performance territory beyond his roots in Baltimore with shows in NYC, Boston and Connecticut, ultimately making move to Queens, NY, where he nows resides in Ridgewood and is quickly reestablishing himself as a comedian and producer.

In addition to standup, Mark is an improviser, actor, writer and live show producer involved with the Charm City Comedy Project (CCCP) and the Baltimore Rock Opera Society (BROS). As a member of CCCP Mark performs short form improv with “Waiting For Steinberg” and writes and produces a monthly live podcast entitled “A Very Special Episode” wherein old sitcoms of a “Very Special Nature” are given a 2nd life as a new cast of performers does a live reading, while Mark offers live editorial in the form of commentary and a new sound effect track.

As a member of BROS, Mark recently debuted an original interactive Rock Opera he wrote, entitled “Revival,” to sold out crowds in the spring of 2015. Other past involvement with BROS has seen him digital shorts and on stage for numerous original productions including the face melting heavy metal epic entitiled “Grundlehammer.”

Mark is available as a host or featured act at Clubs, Colleges and Special Events of all types. Contact Booking@BestMarkMiller.com and follow his social media accounts for updates on where to see him next, or if you can’t wait that long, check out the content that is just a few clicks and scrolls away on this very page right now….

You can also call his Dial A Joke Line:
(408) 502 – 6275
…and hear new and interesting voicemail messages whenever he feels like changing them:

Here is a playlist of some of my Comedy Performances:

Also check out my Media section for more cool stuff.

Look at the picture